A while back, after purchasing packaged Chinese BBQ pork at CostCo, the idea for this recipe came to me. It's easy and takes about 20 minutes. The last time I made it, I thought about adding toasted sliced almonds for flavor and texture, but the market where I was shopping didn't have any in the bulk section, but they did have spicy pepitas. The pepitas added an extra spicy seasoning and texture, but I would are completely optional. 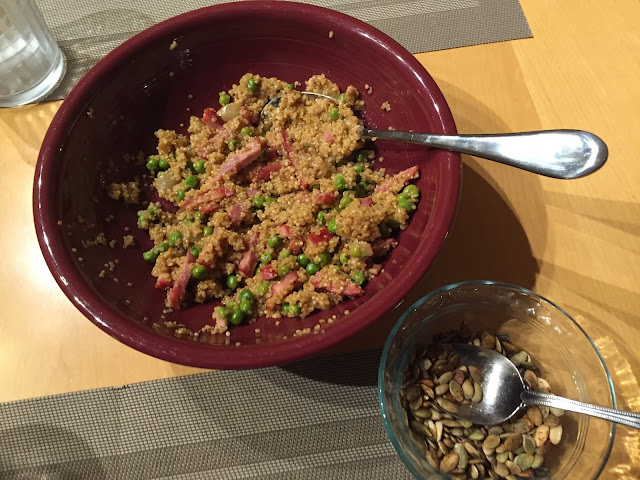 1) In 1993 I attended a five day camp of the Puget Sound Guitar Workshop. It's sort of like summer camp for adults, with music classes. I took a not-quite for beginners guitar class, a singing class (I learned a lot, but you still don't want to hear me sing), and a beginner's harmonica class. I also somehow managed during cabin signup on arrival to choose the cabin assigned to snorers (despite not being a snorer myself).

The last evening of the camp, there was a showcase for the students who wanted to perform for the other campers. One them a bearded man, probably in his late 30s, performed on guitar a composition of his. The piece was decent, and the guitarist quite clearly had a lot of talent. His seemed not quite at ease playing in front of an audience, but his skill shown through, he played from the heart with serious intensity and you could tell the time he spent practicing the piece. It was a good performance. But the audience was laughing through almost all of it. Not because of the guitarist, but because the camp dog, a yellow labrador retriever, which had already been hanging out on stage during other performances, while to the side and behind the guitarist (and not visible to him) chose to spend the entirety of the performance licking his balls.