550,000: An Absolutely True Story with Four Disappointments for the Reader Along the Way 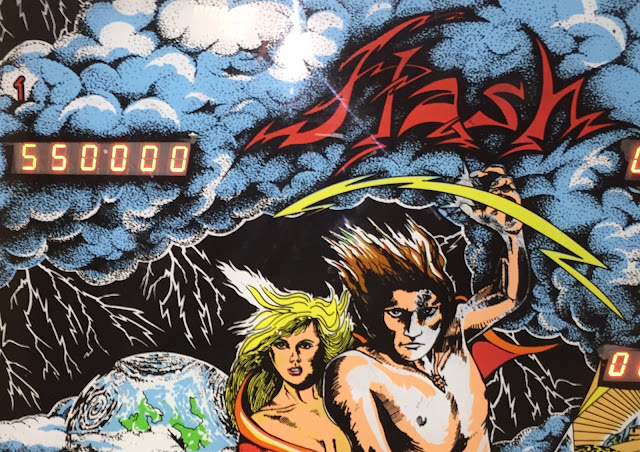 This story starts with 550,000, the high score on the pinball machine I inherited from my father.

Beyond the memories we have of those who have passed away, we also have physical tokens of their existence. Photographs of those no longer alive are no doubt the most common (although if a photograph only exists in digital media and never printed, you could say it's not a true physical item). But we also have their handiwork, such as the ceramic matzoh plate my father made in the early 90s that looks like a sheet of matzoh: 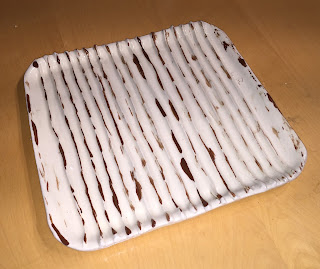 To me, some of the most emotionally resonant tokens are things that had been handwritten by the deceased, mainly due to the uniqueness of handwriting that has the immediacy of "This was written by the person who no longer with us, in their own hand, holding a pen or pencil." One example that I have is a label on a large thermos, identifiable as being from the 70s with the orange floral pattern decorating it. It has a large white push button on the top to dispense its contents. It is the type of thermos you find on folding tables at something like a PTA event, used to provide coffee. In fact, on the label is "Decaf Coffee" is written in my mother's handwriting, a precise narrow slanted mix of cursive and block letters that far excels the quality of my handwriting. And I'm going to disappoint you in not showing a picture of the label with my mother's handwriting as I can't find the thermos, somehow misplaced in the move we made four years ago. (Disappointment #1)


But I have my parents' rolodex. Under its dust-covered smoky-brown translucent lid, it is overstuffed with hundreds of mostly hand-written cards. Here's one with an example my mother's handwriting:

There's a story to be told about the rolodex, an obsolescent tool containing a collection of cards written by the deceased, listing people who are mostly assuredly deceased as well by now (and even dead while the rolodex was in use: note the crossed out "Frank"). But that is a story for another post. (Disappointment #2)

But perhaps the thing that I've told most as being the most interesting token of my father in my house is that twenty years after my father's death, the high score on the pinball machine, the 550,000 is still his. It's a William's "Flash", manufactured in 1979. 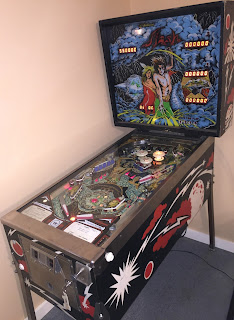 The story of the pinball machine is that my brothers and I bought it as a gift for my father's 62nd birthday in 1988, the year after my mother's death. Why a pinball machine? We had family friends in Palo Alto that had one at home, and in the occasions we visited them, my father clearly enjoyed playing it. So, my brothers and I decided to give him a pinball machine. It's been nearly 30 years, so the memories of buying it are somewhat hazy, but what I remember is that in the Yellow Pages I found a company that sold used pinball machines, located near LAX on Aviation Boulevard. I don't remember how much we paid for it.

After my father's death in 1994 (and after his 1990 move from L.A. to Bainbridge Island, near me in Seattle), as being the only one of his children not living in the Bay Area, it made sense for me the one to take it. It's sitting in my family room, and not used frequently, except when we hold parties. (I had it refurbished a couple of years ago by Pinheads Pinball, a couple of really great guys who are pinball aficionados who have other careers, but have a business that repairs pinball machines because of their love of pinball).

I once came close to beating the 550,000 high score, more that 25 years ago. Each game has three balls, and on the second ball I became a pinball wizard, was in the zone, was in the groove, was in a moment of Zen. I knew where the ball would head next. I knew when to hit a flipper at just the right moment. I knew when to jostle the machine a little to the left or right to make sure the ball didn't slip through the gap between the flippers or the side lanes. And after what seemed like endless minutes, I finally lost the ball and had a score just 8000 points behind the high score. With my third and final ball, I knew it would be simple to get those last points to beat the high score. It could be done is less than ten seconds, maybe even five, and quite possibly without me having to do anything but pull the plunger and shoot the ball out. The ball just needed to hit enough bumpers and rollover switches at the top of the arena before the it rolled down towards the flippers. I pulled the plunger, the ball shot up, hit one bumper which bounced it straight down between and past the flippers. And it was over. (Disappointment #3)

But then, if I had beaten that high score, I wouldn't have been able to tell this story about seeing the lit up 550,000 point high score and it reminding me of my father.

However, the story continues. Last year when my brothers were visiting me in Seattle, the pinball machine was on and while the 550,000 flashed, I told my brothers about how Dad still had the high score. My older brother said, "Actually, that's my score." (Disappointment #4)

And this sentimental nostalgic story I've been telling for years, I find is not true. I wouldn't call it a lie. I certainly thought it was true. But I can't tell that story anymore.

But I have a new story to tell. This story is the one where for twenty years I told the story about one of the legacies my father left was the high score on my pinball machine, only to find out that for twenty years I was telling a false story.

(I have a piece of fiction, with perhaps a similar theme, called "An Honest Man".  Its first sentence is: "The first thing you should know is that everything that I write here is a lie.")