How can you tell if you have a light saber or a heavy saber? (How to Entertain Children #1)

For my son Liam's tenth birthday party, his chosen theme was a mashup of Star Wars, Star Trek and Dr. Who. Here's the invitation my wife sent out: 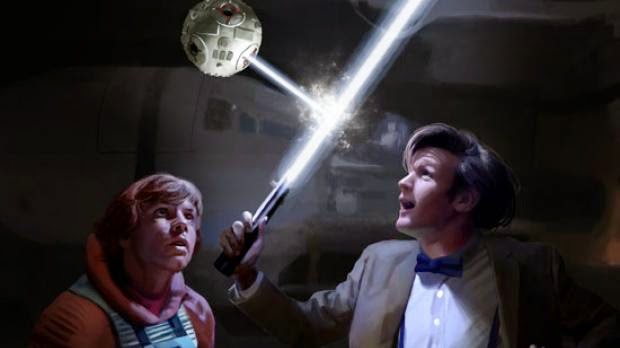 IMAGINE IF YOU COULD TRAVEL ON THE T.A.R.D.I.S. TO A GALAXY FAR, FAR, AWAY AND BOLDLY GO WHERE NO ONE HAS GONE BEFORE....

The Doctor (10th one of course), Captain Picard, and Yoda request your presence at the celebration of Liam turning 10!

Please drop your children off for a scavenger hunt and birthday treats.

Gifts are welcome but not required. Daleks, Klingons, and storm troopers will be turned away.

We promise to have your children returned to this time period and universe by the time you come to pick them up.


The activity he requested was a scavenger hunt. I had about a month to come up with how to do a scavenger hunt in our house (with a January birthday in Seattle, you really don't want to do it outside). And the scavenger hunt needed to be related to the Star Wars, Star Trek and Dr. Who theme.

First, I had to come up with what this scavenger hunt would be. I decided it would be puzzle clues, one leading to the next. With 14 of his friends invited, and not wanting everyone hunting for the same clue en masse through our house, I decided to break everyone one up into teams of two or three, each team searching for their own set of clues. That meant five teams, and conveniently I found this set of 50 small envelopes, with 10 each of 5 bright colors. Each team would be assigned an envelope color and would hunt for their envelopes one by one.


This meant I needed to come up with 50 Star Wars, Star Trek and Dr. Who themed clues. Which seemed daunting. Then I decided that all teams would share the last clue (more on that below), which cut down the number of clues to 45. Over a few weeks, I mostly succeeded in coming up with the clues on the theme, and some that were completely off theme because I ran out of ideas for theme-related clues.

The ones I thought that would be relatively easy:
Some of my favorites:
(And to not bore you, I won't list the 30+ other clues, but if you're really interested I'd be happy to email them to you.)

For the five teams, I tried to give them a good spread of clues with various levels of difficulty, and distributed relatively evenly around the house.

For their last clue, I decided to give everyone the same task to complete: to go to Liam's room and out of Lego build either a Tardis, a land speeder, or the Starship Enterprise. I thought this would be good way to end the scavenger hunt, with all the kids together in one room keeping busy and hopefully relatively quiet.

I wanted the kids to have fun, and for this to not be too competitive, so it was set up as a challenge, not a contest.

These are the rules I read out before the hunt began:


There was some squabbling about who was which team (which I solved by my assigning the squabblers to teams with the explanation "Because I said so.").  At the start a lot of the kids need help understanding how the clues worked ("The Empire Strikes Back starts on the planet Hoth - I don't get this. What do we do." Me: "Do you remember the start of the Empire Strikes Back?" "Yes." Me: "Where were they?" "On the ice planet Hoth." Me: "Okay, if it's an ice planet, it's very cold. Where is somewhere cold in the house?"). Hints were needed by almost every team, but as the hunt went on, they needed fewer hints.

And it all turned out well and not only did the kids had fun, I really had a good time coming up with the hunt and its clues as creative diversion.

I'll leave this with what was probably my hardest non-theme clue:
He took away the tea and was left with a table. The police could charge him with theft as he left a lot of fingerprints on it.

If you can solve that, here's the last of the cookies I made for the party: 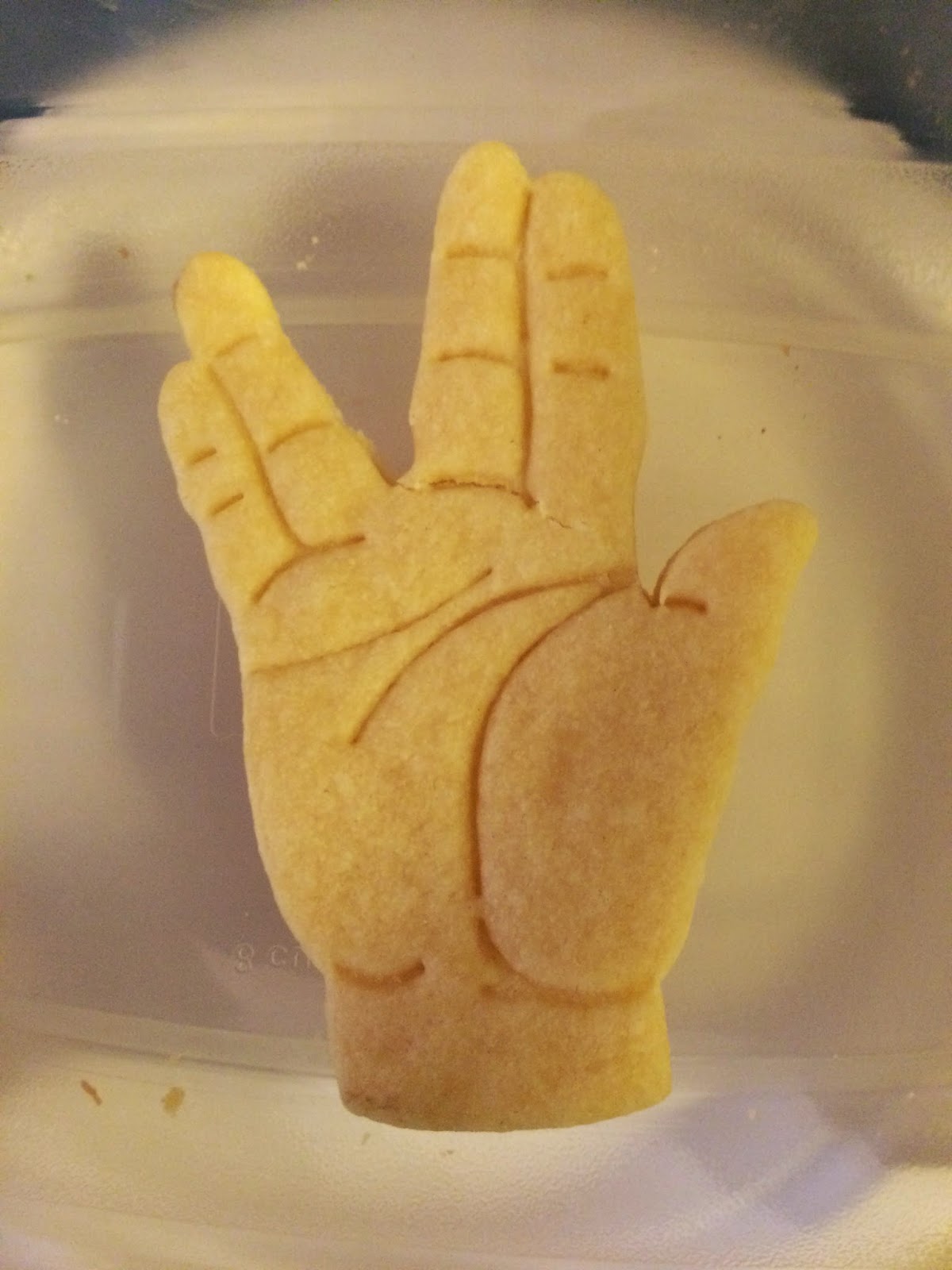 And in memory of Leonard Nimoy: 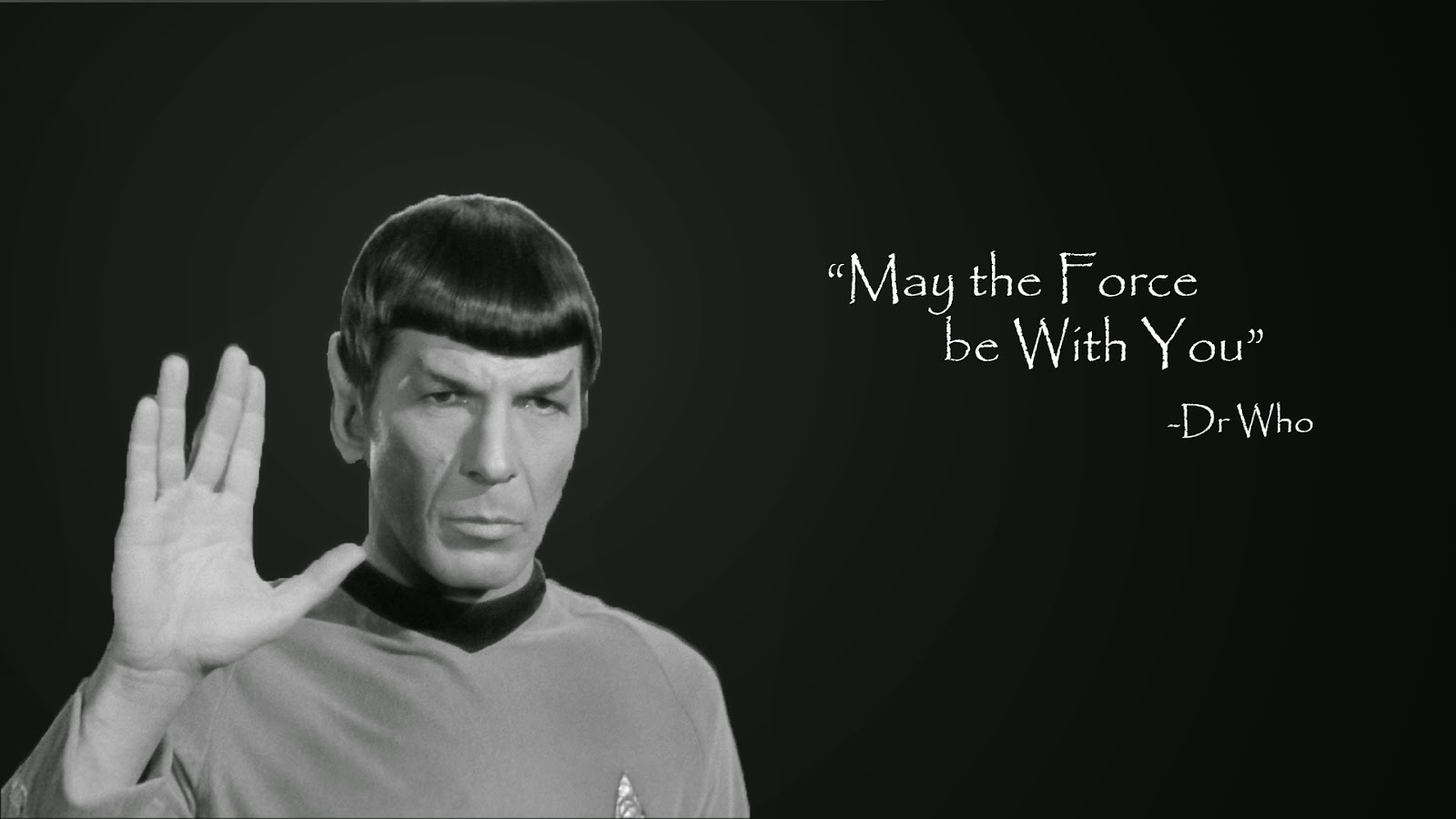